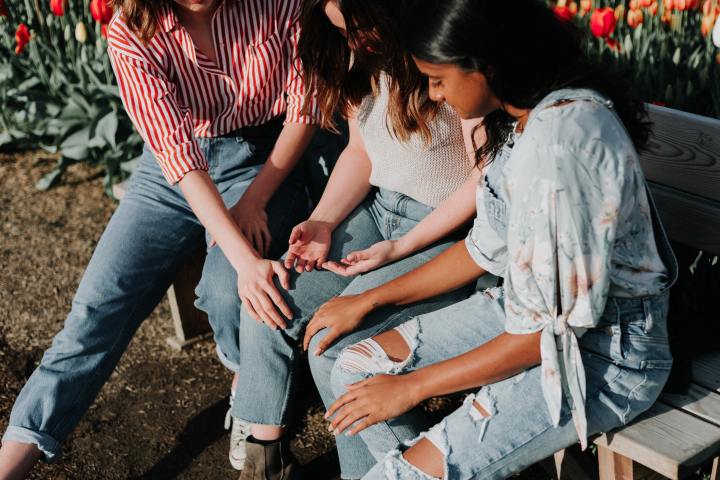 In the biblical story of the garden of Eden, we are introduced to the scene of the serpent starting a conversation with the woman we now know as Eve. He begins their discourse with a question:

“Has God indeed said, ‘You shall not eat of every tree of the garden’?” (Genesis 2:1 NKJV)

Let’s pause there for a moment. Whether they were already speaking before this or not is unknown, but, either way, something about the question foreshadows the serpent’s intent. He brings up a topic that involves a third party who is not present.

Lesson #1: Be wary of people who gossip. Godly community does not entertain hearsay.

The woman, Eve, provides a response to the serpent’s question, but she appears to be misinformed:

As I mentioned, Eve appears to have her facts mixed up when she answers the question. If we backtrack to a previous scene, we can compare notes:

16 And the Lord God commanded the man, saying, “Of every tree of the garden you may freely eat; 17 but of the tree of the knowledge of good and evil you shall not eat, for in the day that you eat of it you shall surely die.” (Genesis 1:16-17 NKJV)

Taking a look at the text, we can see that what God actually said was eating the fruit was not allowed. There is no mention of touching the fruit in God’s directive to the man, who we now know as Adam (we’ll talk more about this detail later). Maybe Eve misunderstood, was given the information with that additional instruction, or wanted to implement an extra precaution to ensure that she was obedient to God’s command. We don’t know. However, our second lesson is revealed in the serpent’s response:

“You will not surely die. 5 For God knows that in the day you eat of it your eyes will be opened, and you will be like God, knowing good and evil.” (Genesis 2:4b-5 NKJV)

Does that first part sound familiar? It should. The serpent appears to have a more accurate memory of God’s directive than Eve did in the moment. However, rather than correct her for the unnecessary addition she made, he chooses to negate God’s command and place the thought of being “like God” in her mind instead.

Lesson #2: Godly community will not encourage you to defy God’s word.

The serpent clearly had an understanding of the purpose of the tree of the knowledge of good and evil that Eve did not possess. He could have helped to improve her understanding of what God said by encouraging her to seek God for clarity, as godly community does. Instead, he used it as an opportunity to take advantage of the situation and place a thought in her mind that sparked a desire for something she wasn’t meant to have. The scene continues with Eve, seemingly having given some thought to what the serpent proposed:

6 So when the woman saw that the tree was good for food, that it was pleasant to the eyes, and a tree desirable to make one wise, she took of its fruit and ate. She also gave to her husband with her, and he ate. 7 Then the eyes of both of them were opened, and they knew that they were naked; and they sewed fig leaves together and made themselves coverings. (Genesis 3:6-7 NKJV)

Well that escalated quickly… Eve, with her new found “understanding” of what the fruit of the forbidden tree could offer her, made a decision. The problem is, she made an ill-informed one. Let’s take a look at another previous scene of the story:

“…the Lord God made every tree grow that is pleasant to the sight and good for food…” (Genesis 2:9 NKJV)

Once again, we can see that Eve added on to what God intended. The verse above concludes with the mention of the existence of the tree of the knowledge of good and evil (what a mouthful!) within the garden. It does not include any other information about that tree, or its fruit, until God directs Adam not to eat from it. This is important because the serpent accomplished what many individuals struggling with the “misery loves company” complex seek to achieve, whether intentionally or not. He presented an idea to Eve that distorted the truth and would only lead to an undesirable outcome, which he was already familiar with (for context, the serpent in this story represents the enemy, who we now know as Satan, which means “the accuser”, but that’s for another time). The even more unfortunate part of the story is that Eve shared her misinformed decision with her husband (who seemed to have forgotten what God explicitly told him). After they both made the decision to defy God’s command to fulfill a desire that didn’t appear present until the serpent interjected, they experienced the first consequence of disobedience, the loss of innocence/purity. In the face of this new experience, they attempted to adjust by taking elements from their environment to shield themselves from unwanted exposure.

This theme continues as God enters the scene, ” walking in the garden in the cool of the day,” and Eve and her husband, Adam, “hid themselves from the presence of the Lord God among the trees of the garden.” (Genesis 3:8 NKJV) They went from being unashamedly naked and peacefully dwelling with God in the beautiful garden, to covering their nakedness and hiding out.

The third, and possibly most important, lesson we learn from this story is this:

Adam has an important role in this story. In the scene where God instructed him not to eat of the fruit of the tree of the knowledge of good and evil (still a mouthful), he was given a choice. That choice was coupled with responsibility the moment that Eve brought him the fruit to eat. He could have done many things differently (as I’m sure many of us noticed and can definitely relate to). Nonetheless, he took the fruit and ate it, knowing that God told him not to. Maybe he wanted to address her poor decision but felt bad in the moment and instead went the “if you can’t beat ’em join ’em” route. Maybe he was secretly curious about the fruit of the tree and used this as an excuse to taste it. Whatever his reasoning, the fact remains that he made a poor personal decision in eating the fruit and a poor interpersonal decision in neglecting to be the godly community that Eve needed in that moment. Instead, they both faced an unexpected consequence of their actions when they realized they were naked. Nakedness is often associated with vulnerability, which is undoubtedly important in intimate relationships. In one moment, their poor choice cost them intimacy with each other and with God.

This part of the biblical narrative opens our eyes to the cost of a poor decision and the incredible importance of godly community (which God calls us to have and be for others). I hope you’ll take some time to evaluate your life and pray, asking God for guidance about what may need to change in you and in your relationships.